When Back-Door Roth IRAs Cause More Harm Than Good 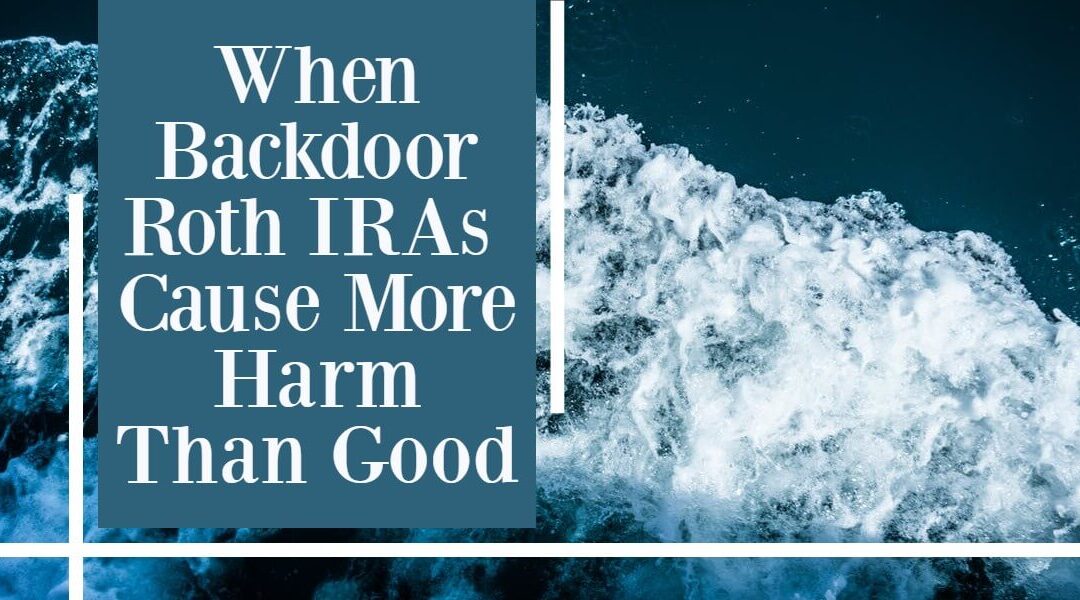 The Back-door Roth IRA is a great strategy for high income earners. But you must proceed with caution. We’re finding that, for many people, it’s unknowingly causing more harm than good. How can you avoid making this critical mistake?

Before we jump into our discussion, if you’d rather listen than read, check out this podcast from Finance For Physicians:

In case you need a quick refresh, the Back-door Roth IRA strategy is a way for high income earners to indirectly contribute to a Roth IRA even if their income exceeds the contribution thresholds. For example, if you make $500,000 per year, you cannot contribute directly to a Roth IRA because you’re over the income limit. But you can contribute to a Traditional IRA and you can convert that Traditional IRA to a Roth IRA. And that’s basically the back-door way into the Roth IRA. Keep in mind, there are a bunch of technical details that come into play with this strategy. And before executing on it, you should be familiar with these technical details and/or pay someone else to help you.

But sometimes understanding the technical details isn’t enough. Dr. Smith knows the ins and outs of the back-door Roth IRA strategy. She handles the finances for her household and knows this strategy makes sense for her family because they have already maxed out the other possible tax shelters and still have plenty of leftover in taxable investments. It was a no brainer for her to begin funding the back-door Roth IRA. And she followed all the steps. To avoid future issues with the pro-rata rule, she zeroed out all existing pre-tax Traditional IRA balances by rolling them into their existing pre-tax 401k accounts. She set up a new Roth IRA to receive the Roth Conversion funds. She then contributed $5,500 to her Traditional IRA for 2017. To avoid violating the step transaction doctrine, she waited a few months before processing the Roth Conversion which allowed her to move $5,500 from her Traditional IRA into her Roth IRA. This left her with $5,500 in her Roth IRA. She also completed the same exact steps for her husband, so he now has $5,500 in his Roth IRA too. Around tax time, she met with their accountant to complete their 2017 returns. In this meeting, she shared that they both funded back-door Roth IRAs in 2017. Their accountant takes note and moves on. At this point, Dr. Smith marks the Back Door Roth IRA task off her checklist for the year. She has done everything she needs to do and all should be well. Like any other year, her accountant files their tax returns uneventfully and everything looks good. Dr. Smith repeats the exact same task in 2018 except the max is now $6,000 for each IRA. And as far as she can tell, everything looks good.

So let’s take stock. Over the course of two years, they contributed $23,000 to IRAs that were converted to Roth IRAs. Now all $23,000 is fully sheltered from any future taxation for as long as they are alive. That’s far better than having $23,000 invested fully subject to taxation every single year in a taxable investment account. Or is it?

Soon after filing their 2018 returns, we started working with the Smiths. As a part of our process of beginning to work with new clients, we typically review prior year tax returns. In reviewing the Smith’s returns, we noticed something was off. They had $12,000 of taxable income listed on line 4b (taxable amount of IRAs, pensions, and annuities). We see these often enough to immediately recognize this issue. The return was processed incorrectly and, as a result, the income they used to fund their back-door Roth IRAs was getting taxed at over 100%.

To understand what happened, we have to get into the weeds a bit. When they met with their accountant around tax time, they brought the form 1099-R for the given tax year. This was verification that they had completed the Roth Conversion. The form lists the amounts converted from Traditional to Roth IRA in the tax year ($5,500 for 2017 and $6,000 for 2018 for each spouse) on line 2a (taxable amount). And the box is checked underneath for “taxable amount not determined”. They verbally told their accountant they funded back-door Roth IRAs. But their accountant wasn’t totally clear on what they meant so after their meeting, he/she looked up the term “back-door Roth” in their tax definitions booklet and realized it doesn’t exist (which is true – it’s actually a term someone made up for the strategy). So they decided to rely on the forms provided. I’m sure this accountant is used to clients mixing up tax terms or using incorrect descriptions. So they probably have to lean heavily on the legal forms to verify accuracy. And so in this case, the only written verification is the form 1099-R. It clearly indicates they moved money out of their Traditional IRA. 99% of Traditional IRAs are pre-tax accounts. And many accountants incorrectly assume that because the 1099-R lists the amount on the “taxable amount” line that the transaction is fully taxable. And even if they didn’t assume it was taxable from the form or because most are, they have no record of any prior Traditional IRA contributions. They did hear the client say something about back-door Roth IRA but that’s not even a legal term. So they go with what they have and they process it as if it’s a Roth Conversion on a fully taxable pre-tax Traditional IRA. This triggers additional ordinary income in the amount of the conversion. And that’s why we’re seeing it listed on line 4b as taxable.

So what’s the damage? Well, they’re in the 50% marginal tax rate. So for every extra dollar of ordinary income, they pay 50 cents. Plus, for this couple, every extra dollar of income increases their student loan costs by 10 cents because they’re going for PSLF. They used $23,000 of their income in 2017 and 2018 to fund the IRAs. This $23,000 of income triggered $11,500 of tax. And then the conversion was treated as an additional $23,000 of income also taxed at 50%. So they paid 100% on the $23,000 plus the additional student loan costs. That’s so bad, it totally ruins the tax benefits associated with the Roth IRA. They would have been better off just keeping the money in a taxable investment account.

Fortunately, you can file for amended returns for up to three years after the date you originally filed. So they were able to correct the issue and get an $11,500 refund. But they couldn’t correct the lost PSLF benefits (~$2,300).

Unfortunately, this is not an isolated scenario. It seems to be particularly common with people that are doing back-door Roth IRAs on their own without a second set of eyes. It sucks to get double taxed like this, but the most concerning part is many of these people have no idea it’s even occurring.

So if you’re reading this and you’ve been doing back-door Roth IRAs on your own in the past, do yourself a favor. Either give us a call and we can talk about how we might help. Or pull out the past few years tax returns yourself and look at the form 1040 (the main form with all the summary info). Check to see if there is a balance on line 4b. A few dollars or even a few hundred dollars isn’t too concerning. This can occur if you invest the Traditional IRA and it grows before you convert it to Roth. But if it’s bigger than a few hundred, you may have a problem. It would be worth digging deeper to find out if it was processed correctly.